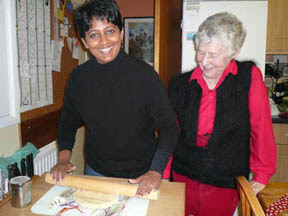 Audrey & John Tapper Sr. are Anita’s in-laws and two of my favorite people. They live on the Welsh border town of Garway. We visited them in January 2007 and Audrey gave Anita and me a 101 on making her famous Welsh cakes. These are the most delicious things I have ever eaten. They are cooked on a skillet instead of an oven and use lard (don’t faint) and margarine instead of butter. Don’t even think of substituting anything else. Believe me, it does not quite taste the same.

Self-raising flour- 8oz
Lard- 2oz
Margarine-2oz
Currents (not raisins, these are smaller/darker)-2oz
Sugar-3oz
Eggs –1
Mixed spice (optional – this I found is only available in England)- ½ tsp