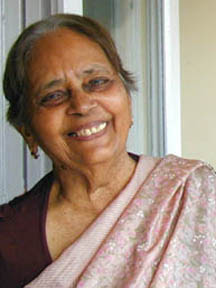 Oma, my mom was the ultimate Karma Chef - a culinary Queen, bold, curious and inventive. She was a sensational cook. Ask anyone in my family, and they will tell you stories about the food and fun times in Oma’s house. It was open table at all times: relatives, friends and friends of friends would pop by unannounced at mealtimes and there was always plenty to go around. Oma could augment a meal for two to feed an army. Back in days when packaged or frozen food was not available in India, Oma would shell and freeze her own peas, fresh corn and hothouse tomatoes. Her canning machine was her pride and joy. She would fill shelf after shelf with tinned mangoes, lychees and pineapple from her garden. She bottled mulberry wine, gooseberry jam, spicy mayonnaise and her world famous orange marmalade. Her freezer was chock full of bumpy packages - mysterious ingredients she could toss together or throw in the oven to create gourmet dishes you’d think she planned for days.

Oma was the mother of invention. In times of scarcity, peanuts would be pounded with almond essence to pass off as the richer cousin. “Tang” orange drink crystals would be whisked with fresh cream to layer her famous Orange Sponge Cake giving it that slightly tart, fresh taste, no essence could match. Her crowning glory, undoubtedly was inventing the donut maker. Oma consulted with the local blacksmith, a wizened man with runny eyes who lived in a soot filled hut in the back alleys of the vegetable market to invent an unwieldy contraption that actually popped out professional quality donuts. The only downside was friends and family had to endure the Summer of the Endless Donut. We ate so many donuts, some brilliant, some bizarre, that our eyes glazed over. Finally and much to everyone’s relief the maid threw the donut maker away, claiming it was a mistake. Everybody, except Oma knew she had been bribed by cousin Shanoo. To add to our luck the old blacksmith also died, ending the donut era in the family for good. But by then Oma was already onto her next big thing....

Oma would host the most entertaining and hilarious foodie get-togethers. When the produce shortage hit the city because of a transport strike, Oma announced she was having an “Eggplant Festival” (eggplant being the only vegetable locally available) and invited all and sundry. I took off from work to attend the party and found the house rollicking and full of jolly people. The guests were served a gourmet four-course meal - everything eggplant, even dessert which turned out to be a delicious light and fluffy soufflé worthy of any distinguished chef.

Ah Oma…. so much to remember and so much missed. She died on 24th June 2004, peacefully in her own bed, surrounded by the love of her dear ones. She lived 80 grand years completely on her own terms and beholden to none. Friends and family gathered from far and wide. That evening we all sat around the dining table in a joyous group to drink tea, laugh and share the stories of her life. The sadness of course came much later.
Posted by Chef Wannabe at 2:38 PM

Email ThisBlogThis!Share to TwitterShare to FacebookShare to Pinterest
Labels: oma

Just loved the article on Oma, it really brought back old memories going back to her light light lght cakes back in our college days. And thought the donut story was hilarious! Hadn't heard it before!
Mimi