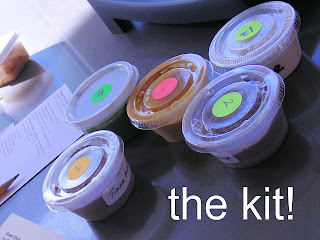 
No communication, obviously, because I'm still not certain what he's accusing me of. I wanted to say something like "I've been to a opium den of spices." or "I was having an illicit affair massaging a Kale salad." But it is best not to antagonize one in a tenuous mood.

“Did you miss me?” I asked, knowing full well he never admit anything a kin to that. Let me insert a pregnant pause here, or a long piece of dead air, for an answer that's never coming. Cue theme to Jeopardy in your head for a moment please.
The cooler box and the groceries were unloaded from the car by yours truly with no help from the brooding spouse. I load the rice cooker and I put that awe-inspiring spice pack in the freezer, as instructed by Chef wannabe. Then I find my card for ‘Green Chicken Korma (spice level****)’; Shona, has typed up a few handy recipe cards for us. It says ‘take a heavy bottomed pot with cover -- heat oil and add chopped onions’. I decided to use the Visionware glass saucepan, my main go to pan.


"We were not cooking dinner," I say to the DH, "dinner isn't cooked, yet; the chicken is only marinated.” I was determined he wasn't going to dampen my high spirits. “Be a dear and chop this onion please.” About this time he notices the case of Negro Modelo on the floor next to the fridge; he theatrically rips open the box and finds places in the refrigerator for each and every bottle; and takes the box outside to the recycled receptacle. Only then does he finally chop the onion. 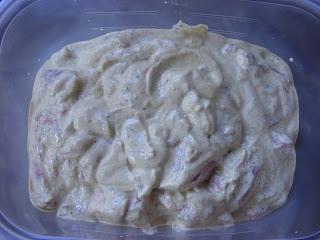 Somewhere, sometime, probably in high school, the entire male population learns you can never carry out any request instantly; first one must lodge a symbolic protest, somewhat passive aggressive, if you ask me. I must've been absent that day, because I still do not understand it.


I digress, Green Chicken Korma recipe says to fry onions until medium brown. Just as the onions are beginning to simmer I realized a Ziploc container with the marinated chicken is in Shona's spice refrigerator; Yes, she has a separate refrigerator for spices. The wind was out of my sails now. Phoned Shona, she dispenses her darling hubby, Vinoo, immediately to meet me halfway with the chicken marinade in tow. The day is saved!


We both have just under a 10 Mile Drive the meeting point being, the city dump. This time in the evening the dump is closed, but it still smells bad. So it's a matter of turning off the highway and waiting only a minute or two for one or the other to show up in that foul smelling place. As it happens, we arrive at the exact same time. Picture this if you will, Vinoo in his hot little sport car with vanity plates and me in an early 90s old SUV. I pulled in directly behind him, and we both exited our vehicles at the same time, Vinoo, with a small six-pack cooler in hand. Before we could approach each other blinding lights were in our eyes. From behind the flood of lights emerged a monstrously huge silhouette of a big cop.
“What are you doing here”, he demanded.
Before I could say anything Vinoo answers in his 007 voice, "exchanging chickens."
"Yes!" I agreed, "I left it at his house."
By this time, the policeman, was close enough to us that we could make out a face on him. Vinoo handed off the cooler to me and I asked if there was a problem.
“No” he said. “just wondered what you were doing.” With that he got back in his cruiser, turned around and headed west. Vinoo turnaround and headed east. I turned around and headed south. The scenario had the making of a comedy caper, but I can't quite put my finger on what was so funny. I wanted to say something like "I've been to a opium den of spices." or "I was having an illicit affair massaging a Kale salad." Or "there's a body in the trunk, a chicken’s carcass stewing in marinade." But it is best not to antagonize one in a tenuous mood.
Back home, I turned the burner on and heated up the brown onions, dumped in the chicken and covered to cook for about 20 minutes. Well actually, I stirred it twice in 20 minutes. Here's a part I am not clear on, the directions say to stir in the cashew powder. Do I cut the heat or no? I turned the burn off. I served it with rice and massaged Kale salad. A meal
fit for a king or so I thought.
The cantankerous King tasted his late supper; he dramatically salted and then devoured it without a word. Took his bare plate to the sink and headed back to his computer. He knew I wanted a review, but I was going to subplicate him for it.
“How was it?” I inquired.
"It was missing something."
“What?”
“I don't know, something. “
“And the salad?” I added, he would just have to amitted it was the best salad ever.
“I didn't care for the greens.” He answered. 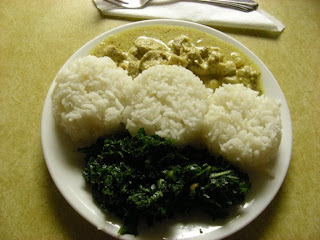 So there you have it the complete review of the Green Chicken Korma. I want to say something like "I've been to a opium den of spices." or "I was having an illicit affair massaging a Kale salad." Or "there's a body in the trunk, a chicken’s carcass stewing in marinade." Or “I spent the afternoon, talking food, shopping for food, drinking tea and cooking with Shona.” It is best not to antagonize one in a tenuous mood but do not feed him either.
Posted by anitra at 2:11 PM

Hey girl! You should know by now that if you keep a starving hubby waiting for too long, he is not going to like anything you cook. "A hungry man maketh a rotten critic". Thank god it was not not my spices to blame, but his aching stomach. The cop and chicken exchange story is one of my favorite! Thanks for the post!