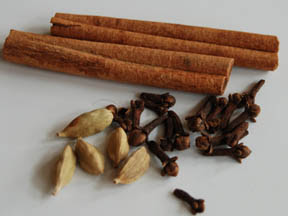 Cinnamon sticks. Cardamom pods (small green ones) and Cloves: Another staple in my kitchen. Keep these in your spice rack at all times. CCC forms the basics of Garam Masala in its powder form but can be used very effectively as whole spices to temper hot oil and flavor curries (the proportions you would use is 1 stick cinnamon, 3 cardamoms, 2 cloves)
I have used this in Chicken karma Korma.
Posted by Chef Wannabe at 11:56 PM